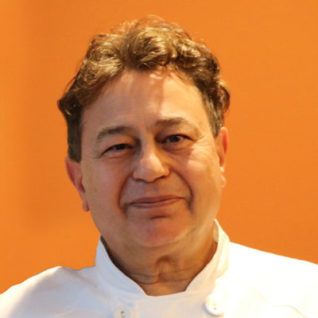 Nader Sharkes is certified as an Executive Chef by the American Culinary Federation. During his 32 years of experience in the Culinary Arts, he has trained thousands of chefs and culinary experts and won multiple teaching and cooking awards.

His relationship with food began at age fifteen. His first and perhaps greatest teacher was his mother. She employed creative strategies and the keenest sense of taste to help fill the bellies of nine children. Spaghetti on toast was one of her specialties.

Being of Turkish decent, he began his studies as a culinarian by exploring Middle Eastern foods. Later, he moved to England, where he worked as a Chef de Commis Café Royal for eight years. Next, his curiosity brought him to Japan, where he fell in love with the local cuisine.

Later, he relocated to the United States, where he worked at the Waldorf Astoria in New York City before finally settling in California. Here, he operated his own Californian restaurant and became a research and development chef for Del Monte Food Corporate.

It was a school demonstration that first raised his interest in teaching. He served as Chair of the Culinary Arts Department at Diablo Valley College for 16 years before joining CCC in 2012.