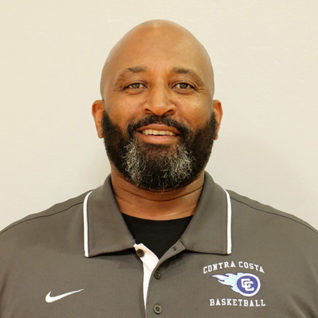 He came to CCC in 2006 after serving two seasons as Men’s Basketball Head Coach at Merritt College.

Prior to returning to his return to CCC, Coach Johnson served two seasons under the previous Head Coach Virgil Watson. As the Head Assistant Coach, Johnson’s efforts and recruiting allowed CCC to secure the Bay Valley Conference title

As the Head Assistant Coach, Contra Costa College Men’s Basketball has cultivated an up-tempo style of play and defensive philosophy that takes players to the next level. As Head Coach, Johnson has recruited, developed, and mentored almost 40 student athletes during their matriculation and transfer to four-year universities on athletic scholarships. He has also secured another Bay Valley Conference Championship.

Johnson is a Richmond High School and Contra Costa College graduate, and prides himself on helping young  athletes from the community reach their full potential on and off the court. As a tenured Community College Professor and Head Coach, Johnson is proud and humble of the success the men’s basketball program has accomplished.