Quick Links
The Contra Costa Community College District invites you to the Undocumented Student Action Week, next week October 18-22. We encourage you to visit our website devoted to this important topic.
Visit Website
Translate 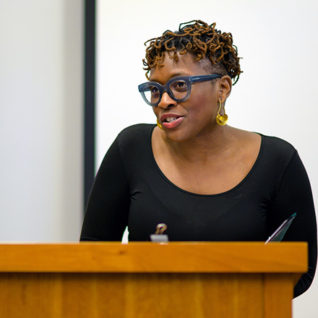 Jeanelle Hope is a First-Generation Scholar

Even as a child, Jeanelle Hope loved history.

“I enjoyed reading biographies, and learning about historical figures at an early age,” she remembers. “My aunt bought me this boxed set of biographies of African American figures. And, by the time I got to 9th or 10th grade, I realized that history was my favorite subject.”

Jeanelle was also a gifted student, who was placed in advanced and accelerated courses in middle school. So, her family wanted to make sure she found a high school that would help her realize her potential.

They found that in Middle College High School at Contra Costa College.

“It seemed,” she says, “like a really great program that would allow me to explore some different interests, beyond what would have been allowed by the constraints of a normal high school.”

And, explore she did.

Jeanelle immersed herself in campus life. She joined the speech and debate team, which took her to competitions around the state. She even taught English courses for first-, second-, and third-graders.

And, she got involved in student government, organizing campus events, helping to run a voter registration drive, and spending countless hours just hanging out in the Student Life area.

In her second year at CCC, Jeanelle became the first Middle College student to be elected ASU president.

But, even students like Jeanelle sometimes need a hand.

When trigonometry posed a problem, she turned to tutoring for help.

Jeanelle graduated from Middle College a year early. But, instead of heading straight to university, she decided to stay at CCC for a fourth year. Inspired by a love of ethnic studies that had blossomed in CCC classrooms, Jeanelle wanted to complete an associate degree in African American Studies.

That extra time at CCC also helped her better prepare to transfer.

One of her professors encouraged her to apply for Rising Above, a program that helps under-served students through things like workshops, career guidance, and leadership development.

Jeanelle says her mentors at CCC were invaluable, as well.

“Just learning how to navigate, how to get through some of these hoops and hurdles as a first-generation college student was important,” she remembers.

“And, I’ll also say that I had a lot of support from the folks in student life, who helped me develop my scholarship applications, who helped me identify and find funding.”

In the end, she was awarded the Kennedy-King scholarship. It would only be the beginning of her academic honors and accomplishments.

After graduating from CCC in 2009, Jeanelle transferred to California State University, Long Beach. Then, she was off to Syracuse University, where her master’s thesis on Afro-Asian solidarity won the prize for best thesis of the year.

That research has kept her close to the subjects she came to love at CCC, where she was given a Distinguished Graduate Award in 2018.

“[I’m] trying to fill this gap in literature,” she explains, “talking about what solidarity looks like, and how black and Asian folks have engaged with each other, within the context of social justice activism.”

As an instructor and PhD candidate at University of California, Davis, her research in those themes expanded, through her doctoral dissertation and now a book manuscript based on it.

“I’m interested in how solidarity building is approached during the contemporary era, and particularly the movement for black lives, as we see right now. I tease through what solidarity is, and how it manifests–not just at the grassroots level, but also how it emerges within art and social production.”

She also conducts research on black girlhood and education, and has spent recent months collecting oral histories about black Sacramento.

“I have a journal article that’s coming out,” she says, “on black Sacramento artists, and how they’re responding to re-segregation and gentrification. I’m actually hoping to begin a book project on it, too.”

And, she’s just taken a job as assistant professor of comparative race and ethnic studies at Texas Christian University.

Through it all, she has held her time at CCC near and dear to her heart.

“I love CCC,” she says. “I really do. It was during my time at CCC that I had an opportunity to understand what college is like, in a place where there are people there to support and nurture you, encountering folks who really cared and have the time to build relationships.”

“Some of my best friends went to Middle College. We stay in very close contact. I still keep in touch with some of my former teachers. And, now, being a professor and having taught at UC Davis, I run into transfer students, former Comets or other folks from the district who have the same love and appreciation for CCC as I do.”

“And, I’m just excited to see where the institution goes in the next few years. I see there’s a whole lot of growth happening on campus. There’s some dope researchers and faculty members there who are truly gems.”