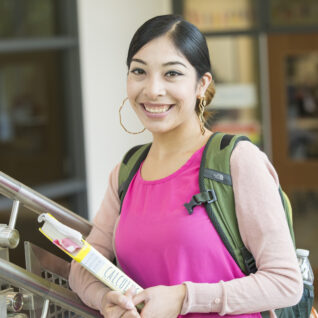 Wrap-Around Fund at the CCC Foundation: Keeping Students from Dropping Out

Contra Costa College (CCC) Foundation’s emergency grant fund, the Wrap-Around Fund, has been an essential program for keeping students in their classes at Contra Costa College. Since its inception in 2017, the goal of the program has been to prevent students from withdrawing due to a sudden financial emergency. Its success over three years is palpable: over $220,000 in Wrap-Around grants given directly to 430 students representing over 50 majors, students who on average are 90% likely to stay enrolled and finish their semesters. We call this a win-win!

The Wrap-Around Fund was initially launched as a pilot program by CCC Foundation Director, Sara Marcellino, due to the high rates of food and housing insecurity among community college students. According to a recent study, 42% of community college students had experienced food insecurity in the past month of taking the survey, 51% had experienced housing insecurity in the last year, and 12% were homeless.

At Contra Costa College, 85% of students come from low- or lower-middle income households and 38% are the first in their families to go to college. CCC’s students are vulnerable to financial crises and typically have little financial support from their families. Because of this, financial hardship is one of the most common reasons CCC students drop out.

Getting money directly into students’ hands is straightforward with our Wrap-Around program, which is administered as a partnership between the Foundation and CCC’s Financial Aid office. Any student at CCC—regardless of immigration status—can apply for Wrap-Around, as long as they are referred by a faculty or staff member and enrolled part-time that semester. By awarding students grants up to $500, the Foundation has successfully kept students at-risk from dropping out. Thank you notes from students are expected once a student receives the money typically about one week after asking for the support.

“This program is a great thing because people like me have little support,” said Antanae Welch, a Fall 2020 Wrap-Around recipient. “It’s refreshing to know that my school, staff, and donors really care about myself and other student’s well-being. With this help, I’m able to focus on school and not have to worry about my financial hardships for a moment. I really appreciate it and want to thank all of the donors to this program for this amazing opportunity.”

On average, the Foundation has distributed $29,302 and 60 awards per semester (excluding summer). So far, between 86% and 97% of recipients have completed the semester that they received Wrap-Around funding, far exceeding the average completion rate at CCC.

Never before was the Wrap-Around tested as it was during the initial months of the Covid-19 pandemic. There was a 300% increase in requests for Wrap-Around support during Spring 2020, the semester the pandemic hit. Being nimble, the Foundation was able to expeditiously process applications and fund even more grants. Despite the challenges the pandemic posed, Spring 2020 had the highest percentage of Wrap-Around recipients of any time completing their semesters, at a rate of 97%.

Since 2017, the Wrap-Around Fund has helped hundreds of students stay in their classes and on their way to a brighter future. This wouldn’t be possible without the many donors who support this program. Thanks to these generous community members, the staff and Board at the CCC Foundation has elected to institutionalize the Wrap-Around Fund as one of its core student success and support programs.