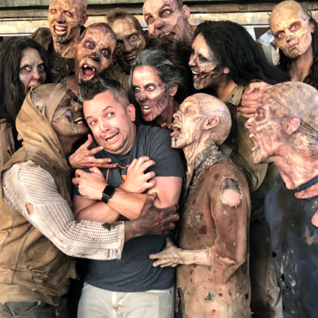 Cristian Cardona didn’t know what he wanted to do when he graduated from Richmond High School in 1996. But, he knew he didn’t want to spend a ton of money at a university while he tried to figure it out.

So, he came to CCC, and earned an associate degree in liberal arts. That gave him a background in a wide variety of subjects, which really paid off once he did decide on a career.

But, that would take a while. Even after earning his AA, Cristian still had no idea what he wanted to do.

He went on to attend CSU Hayward, and continued to pursue a variety of interests. Eventually, he majored in multimedia art. Still undecided on what to do, and unable to afford grad school, he took a break from school.

Cristian spent this time working a variety of retail jobs. One he especially liked was at an electronics store, where he spent a lot of time in the video game section.

“One day I was having a conversation with a really good friend of mine, and he asked what I love doing. I said, ‘I love video games.’ And, he said very plainly, ‘Well, then, why don’t you do that?’”

“And, suddenly, it seemed like a real possibility. I had never really considered it.”

Luckily, he had a connection, through his retail job. Over the last year, he had gotten to know the PlayStation representative who visited regularly.

“I finally worked up the courage to ask her how she got her job at PlayStation, and wound up getting a job as a merchandising rep for PlayStation.”

Cristian became a marketing specialist at the company, before moving through the ranks to become global product manager for PlayStation exclusives.

“I manage [marketing] campaigns,” he explains. “I develop strategies. I like coming to my job every day. and developing that insight that helps us communicate the game to people in a certain way. Finding that one thing that really resonates with people.”

And, the classes he took at CCC still come in handy. A lot.

“I took speech, which actually helped me a ton. I do presentations to developers, studios and heads of studios all the time.”

“I took classes in literature. At the place I work now, we have a lot of conversations about storytelling, so that was really helpful.

“The classes I took in multimedia at CCC helped a bunch, too.”

“They wound up just really providing me a broad perspective on things. And, I’m always surprised when this job requires me to know as much as you can about a lot of things, whether it’s human behavior or human psychology, and I wind up pulling up these kind of random or interesting facts that I learned at CCC.”

Cristian took an even bigger lesson from his time at CCC, though:

“It’s fine not to know what you want to do. You can still continue your studies and learn a lot of things without having the financial pressures of going to a full-time university. Keep moving forward, even it’s at a slower pace. And never compare your pace to someone else’s. Even if it’s part-time, just keep taking advantage of it and learning.”