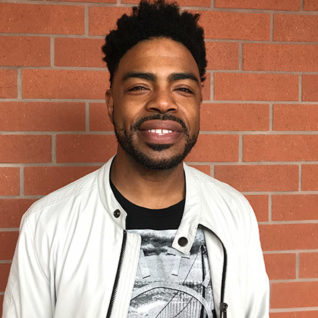 Victor Bolan Jr. Came Back to Make a Difference

Victor Bolan Jr. was born and raised in Richmond. Like many of his peers, he came to Contra Costa College (CCC) after high school unsure of what path he wanted to take.

“I was just doing small courses here and there,” Victor says. “Sometimes part-time, sometimes full-time. My courses were scattered. I had over 85 units, but there was no direction. ”

Everything changed for Victor once he joined the basketball team. Suddenly, Victor was part of a community that expected academic excellence. At CCC, athletes must be enrolled full-time and maintain a 2.5 GPA.

“When I started playing basketball for CCC, I had to really keep up with a counselor,” Victor remembers. “My counselor explained all the degrees I could easily finish with the classes I’d already taken.”

His grades improved, and he took as many classes as he could.

Victor graduated from CCC in 2007 with degrees in sociology, political science, and liberal arts. He was also awarded the prestigious Kennedy-King Scholarship for transfer students. That fall, he moved on to San Diego State University.

“Kennedy-King really helped a lot my first year,” he says, “especially when my housing fell through.”

In 2010, Victor moved back to the Bay Area and started assistant coaching at Albany High School. Now, he also coaches two travel basketball teams of young teens in Richmond.

For Victor, being a coach is about more than training athletes; it’s an opportunity to mentor his students and encourage them to be their best selves. “I always try to tell my students, especially when I see a kid that reminds me of myself, to take all the opportunities they can to better yourself.”

This summer, Victor will be finishing up a physical therapy program at the National Academy of Sports Medicine. Victor says that having a knowledge of anatomy and physiology enables him to properly identify and understand his players’ injuries, which makes him a better coach.

Victor credits being on the basketball team and his mentors in athletics at CCC for shaping his strong work ethic.

“Back then, I was taking 21 units every semester,” Victor remembers. “Everyone was like, ‘Dude you’re crazy!’ But, I wanted to transfer. There’s always been a stubborn part of me that refuses to give up. And that attitude is also what’s made me valuable in the workforce.”

His advice to prospective students? Whatever it is you’re going for: “Just apply! Go for it! All they can do is say no – or maybe they’ll say yes.”