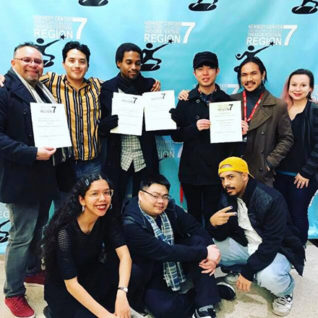 In order to attend the regional competition, students must be nominated by judges who see various college performances in their respective areas.

Diego Loza was nominated for his work in CCC’s production of The Cries of La Llorona. Joshua Saephan performed as his scene partner.

Asha Alvarez was nominated for her stage management of Vengeance: A Ghost Story.

Ninoangelo Lastimosa, Erin Foreman, and Tyler Nguyen were nominated for creating the music for Vengeance.

And, Xavier Johnson was nominated as a journalist.

Another three CCC students were nominated, but unable to attend.

By the end of the festival, CCC students’ work on Vengeance: A Ghost Story had brought home awards for collaboration and sound design. The original scripts for Vengeance and La Llorona have graduated to finals and are still in competition for national awards.

“KCACTF is one of the most artistic and productive theater competitions for college and university students,” said Dramatic Arts Chair and nominated playwright Carlos-Manuel Chavarria.

Hundreds of contenders from around the country participated in various ways. About 400 actors competed through performance. Playwrights were paired with directors, who cast, rehearse and presented a portion of their work by the end of the week. Stage managers were evaluated based on mock performances. Designers created and presented their work. Journalists attended the shows, and wrote coverage that was entered into competition, as well.

The event also gave students the opportunity to attend workshops and talks relating to various aspects of production, like writing, performance, business, and design.

Professional companies, four-year colleges, and scholarships were also on hand, to scout for talent and audition students.

And, of course, there were performances.

“Attending this event every year brings joy, hope, and inspiration to our students,” said Chavarria. “Even if we don’t get any awards. “

But, he added: “I am incredibly proud of our two awards.”