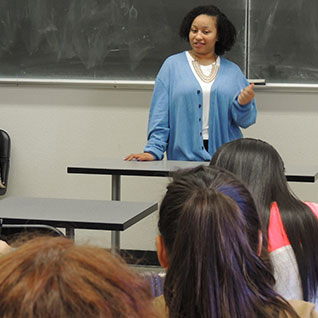 We all have to start somewhere. Tatiana Frank started in CCC’s Certified Nursing Assistant program.

She came to CCC as a busy 17-year-old–with an admittedly bad attitude.

“I would say I was a problem student,” she says. “Not major problems. I turned in my work. But, I’m not gonna lie, I did have an attitude.”

It’s somewhat understandable; she had a lot on her plate. Even in high school, she had to work as much as much as she was legally allowed, to help her grandmother pay bills. During the CNA program, she spent her mornings in high school classes, her afternoons in the CNA course, then her evenings at work.

Tatiana also just didn’t know what was appropriate in a college environment. “[College] was definitely something new.” she explains. “Especially for a 17-year-old.”

A meeting was called, and some people floated the idea of kicking her out of the program. Luckily for everyone, she stayed–and her attitude improved tremendously.

Now, Tatiana says her memories of Contra Costa College are great. Her instructors worked with her to improve her outlook, and her classmates were there for support. Tatiana says that the high school cohort and adult sections were all pretty close as a larger group, and were there to support each other.

“It was actually pretty easy,” she says. “It was very hands-on. On Thursdays and Fridays, we would go to the skills lab, which was pretty cool.”

During the last half of the program, students moved on to clinicals—real-life experience in actual care facilities, where Tatiana loved getting to know the patients.

“The patients were funny,” she says. “They were storytellers. Getting to know the patients definitely want to come back and work again.”

Tatiana also appreciated getting experience at two different facilities during the program—one in Richmond and another in Berkeley.

“They were definitely two different experiences,” she says, “in a kinda cool way. The teams were different. The way they worked, and how they did certain things. I got the best of both worlds.”

After the program ended and Tatiana finished high school, she was hired as a CNA by one of the facilities she had done her clinicals at.

“And since taking the CNA program,” she says, “I’ve moved way, way up the ladder.”

Tatiana even returns to CCC most semesters to talk to students in the CNA program.

But, she still hasn’t reached her ultimate goal, yet. Tatiana plans to one day get a doctorate in nursing.