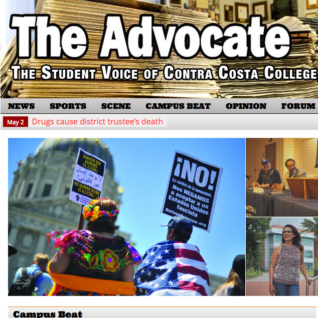 The Associated Collegiate Press is the oldest collegiate press/media organization in the nation. Its National Newspaper Pacemaker Award is considered the highest award in college journalism — the “Pulitzer Prize of student journalism.”

Each year, four of its member colleges receive the Pacesetter Award — a sweepstakes award given to the newspaper staff that won a General Excellence Award with the most accumulated publication and on-the-spot awards. The award is given at the annual JACC State Convention each spring. The Advocate has won the Pacesetter Award 18 times since 1996, most recently in 2015.

Department Chair, Paul DeBolt says, “The journalism department at Contra Costa College is an active, vibrant place where students produce excellent work that reflects well on the college and its community. These awards serve to reinforce that fact while bringing attention to all the hard work and sweat that goes into practicing quality collegiate journalism right here in West Contra Costa County.”