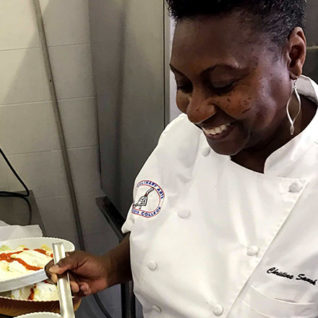 CCC Brought Christine Sanok Out of Retirement–and Took Her to Italy!

It’s never too late to go back to school!

Christine Sanok heard about CCC’s culinary program at her retirement dinner, from a friend who had heard her mention culinary school before.

“I wanted to be a blessing to my family and friends,” Christine explains. “I wasn’t very confident in the kitchen. We host one event a year, and that’s Thanksgiving, which has become sort of a potluck. I wanted to be able to have little dinner parties for friends.”

“Ultimately, I would like to develop a program in our church for youth, teaching them cooking skills and healthier eating habits.”

Surprisingly, Christine’s friend didn’t recommend the expensive private school in San Francisco that she herself had attended.

“She said if she had it to do over again, she wouldn’t go that route,” Christine tells us. “She would go through Contra Costa College’s culinary arts program. She said they had a great program, and they were many thousands of dollars cheaper.”

Christine was already a longtime on-again, off-again Comet. She came here after graduating from Richmond High School in 1973. “I was a cheerleader,” she remembers. The whole nine yards.” But, a move to Oakland pulled her out of CCC after just one semester.

In the late 80s, she came back to CCC to pursue a degree in business administration, but family obligations put those plans on hold.

“I felt it would give me a lot of the skills, a lot of the foundation that you can’t get just taking a cooking class here and there. I thought that would really help me for the rest of my life, really.”

She thought right. Christine says the program has taught her how to be a better, safer, more organized and efficient cook. She even makes her own ingredients like mustard and mayonnaise, now.

“Chef Elisabeth, with her quiet sophisticated way of going about things, is wonderful. And Chef Nader is just incredible, as an instructor and as a chef. There’s not too much that he doesn’t know. Any question a student asks him in class, he has an answer for–and a good answer.”

“This is a commitment,” Christine says. “In this program, you need to be dedicated. You’re going to spend a lot of time, and the more you invest in the program, the more you will definitely get out of the program.”

But, it also offers plenty of fun, memorable experiences.

As a server in Aqua Terra Grill, CCC’s teaching restaurant, Christine served an executive chef from Google, who is himself a CCC graduate.  “He had nothing but wonderful things to say about the program,” she remembers.

And, she got to work with famous chef Martin Yan at a special event.

“You will get these experiences,” she explains, if you’re dedicated and hard-working, and they know that they can depend on you.”

Representing the school well is especially important, she says, if you hope to join the culinary department’s annual trip to Italy, where students learn at two different culinary academies abroad.

“That was a beautiful experience, all around,” she says. “Our typical day was, you get up pretty early in the morning, go have breakfast at the resort. Then the bus would be there around 8:30, 9:00 a.m., and we would go to something like a winery and do a tour, or go learn how to make ricotta, pizza dough, different cheeses, or pasta.”

In the afternoon, they would learn from and with students at one of the two culinary academies that hosted them. “There were some eye-openers for me,” she says. “It changed my whole viewpoint and experience. I still have recipes in Italian that I’m trying to translate!”

This semester will be Christine’s last in the culinary program. She’s finishing her certificate now, because she wants to walk with her classmates at graduation. After that, she’ll take three more general education classes to get her associate degree.

“I think that Contra Costa College’s culinary program is, from what I’ve been told, one of the best for what you pay for. I would recommend it to everybody, at whatever level you’re at. I certainly plan on taking other cooking classes, but it will mean a whole lot more for me, having had the foundation of CCC’s program.”