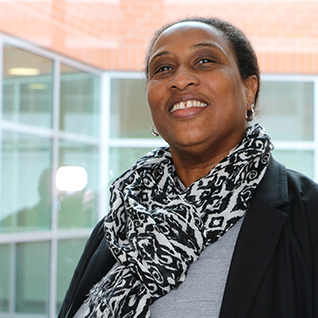 Aspiring Novelist Gwendolyn Bullocks Says, ‘This is My Time!’

Gwendolyn Bullocks came to CCC with the goal of becoming a writer.

“I used to always write. I have one book published. I want it where I travel with my books. I want to be a full-fledged novelist,” Gwendolyn explains.

Gwendolyn will be graduating this May with degrees in English, Arts & Humanities, and Social & Behavioral Sciences, after which she will transfer to a four-year university. She has already been accepted by St. Mary’s College of California and Mills College and is waiting to hear back from UC Santa Barbara and UC Berkeley.

Thanks to the CCC Foundation, Gwendolyn was able to overcome some financial hurdles and stay in school. Gwendolyn is a recipient of the San Pablo Scholars scholarship, #cccwheresmycheck, and Wrap-Around funding.

“Having those scholarships helps a lot,” she explains. “And I tell a lot of people to fill that thing out, to fill out the essays, to think those through. It’s a challenge. I always just say put your heart out there. No one’s going to judge you, because that’s not their place in life. All they need to see is that you want an education [and] you want to go further. And the Foundation will finance you.”

Mentors at CCC also made a difference for Gwendolyn.

After enrolling at CCC, Gwendolyn had a few hurdles to overcome.  Because of an old work injury, she needed to make sure that CCC could support her.

“I’m disabled now,” she explains. “I’m with the DSPS [Disabled Students’ Programs and Services]. So I had to find out, was there someone to support me when I have my issues? And there was. Ruth Gorman [has] been my counselor ever since. She’s had my back, literally. So that was helpful to know that I had an organization that could support me.”

She also had to push aside her concerns about her age.

“When I first started,” she recalls, “I had to look at myself, Gwendolyn, come on! You’ve done this, that, and the other. Don’t let age be the factor of you not doing this.”

CCC has become a home away from home for Gwendolyn.

“Now, my professors? Oh my god, I’m going to miss them. I’ve made friends here. Some of the administration, too. It’s been a whirlwind. It’s been a blast,” she says.

Gwendolyn is on her way, and CCC and the CCC Foundation couldn’t be prouder.

“I don’t want you to read this and say, oh hey, we have another bad luck woman,” she explains. “No, I’m a returning student. I’m finishing this portion of my life because I want to. This is my time.”