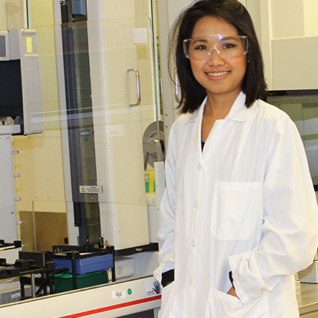 Duy Masuno was born in Vietnam. When she was a teenager, her mother asked if she wanted to study abroad. Duy jumped at the opportunity. She moved to Los Angeles, where she completed high school.

When family in the Bay Area told her mother that there was a community college right next to their home, she decided to give Contra Costa College’s Business Administration program a try.

An internship in that program changed her life. She hated it.

“If it is a career that you plan to do for the rest of your life,” she explains, “it’s no use just to take the classes and get good grades. It’s very important to take the classes, get the good grades and then go out and apply what you’ve learned. An internship or professional shadowing will give you the feel for whether you want to do something for the rest of your life.”

It turned out that she didn’t want to become a business administrator at all.

She was still deciding what she wanted to do instead, when a month-long trip back to Vietnam forced her to try some creative scheduling. Online and short-term classes were her only options that semester.

The first online class she took was Introduction to Biotechnology. “Because,” she explains, “I was able to finish it from across the world.”

But what Duy came to love about biotechnology is the diversity of options it presents.

“Anything you can apply microbiology to,” she explains, is touched by biotech. “Biofuel, pharmaceuticals, gene editing, cancer research. It’s everyday uses, too, like making tires or cosmetics.Biotechnology opens so many doors to me. That’s why I like it.”

“At the moment,” she says, “I’m interested in biofuels and also drug discovery.”

With a change of major, Duy suddenly found herself surrounded by people who shared her interests and values.

“It just became a homey environment for me after I decided to change my major. It felt really good.”

She credits the Center for Science Excellence for helping her through everything from choosing classes to transferring to a four-year school. She also found a new mentor in a USDA program she connected with through the CSE.

In 2015, Duy graduated with associate degrees in biotechnology, chemistry, mathematics and science, economics, and business administration. (She only had one or two classes left to complete the last two, so she decided to just go for it.) In 2017, she graduated from UC Berkeley.

Duy just returned from an internship at a molecular genetics lab at Osaka University in Japan, where her work involved DNA replication.

“If Contra Costa College wasn’t there,” she says, “I don’t think I would be here, at this point. Not graduating from UC Berkeley, not looking at tech internships.”

“It’s the place where I learned everything. I learned how to study. I learned what career paths I could take. I learned that I could get help from school support services. I learned that if I speak out and build my confidence, I can get what I want.”

“So, basically, Contra Costa is like a big monument in my life. It’s a point where I changed my life. I learned that I should invest time to develop myself. I think that’s my personal greatest achievement. I learned to be confident in myself, and to go for it.”