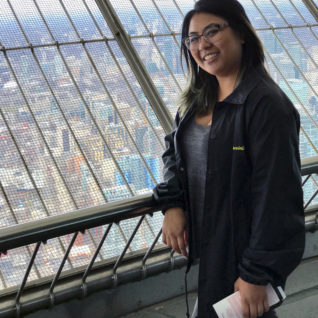 Trixy Arambulo wasn’t sure what she wanted to do when she first came to Contra Costa College. She’d been studying kinesiology at San Jose State University, but decided it wasn’t for her and moved back home to San Pablo.

Inspired by friends who struggled with addiction and mental illness, Trixy decided to take a Health and Human Services course at CCC.

“I wanted to get more insight and education,” she remembers. “More knowledge about [how] drug abuse tied in with mental health.”

She soon found out she wasn’t alone. In fact, most people she met had more direct experience than her.

“Most people,” she explains, “take the class because of lived experience. They want to get into counseling because they’ve been on the other side. They’ve been abused, they’ve been incarcerated, they’ve been homeless. They share as much as they can about the lessons they’ve learned.”

Trixy decided to do one or two certificates of accomplishment in the department. Then she decided to do more. She even became Secretary of the Health and Human Services Club for two consecutive semesters. Now, she’s graduating with Certificates of Accomplishment in Psychosocial Rehabilitation, Dual Diagnosis Screening and Substance Abuse Case Management, as well as a Certificate of Achievement and Associate’s Degree in Human Services.

“Meeting all these role models,” she says. “It just inspires me.”

Her professors say Trixy was shy and withdrawn when she first arrived on campus. But today, she’s an active and important part of the CCC community.

“Everyone loves to participate,” she explains. “I just try to be involved on campus as much as I can.”

She’s also there for other students.

“Because I am Professor Mickels’ assistant in class, I offer notes and extra help outside of class if anyone needs it. Some students have my phone number, and even if it doesn’t relate to class, they can still call me for support.”

In fact, Trixy says that one of her biggest regrets is not taking advantage of more of the available support when she first came to CCC.

Trixy is about to transfer to California State University East Bay, where she plans to major in sociology. She’s happy to have a leg up on friends in bachelor’s and master’s programs that are just discovering things she learned getting her associate’s at CCC. “It definitely sets you apart from other students,” she says.

“You could start here and go to basically any university you dream of, just by putting in the work.”

And if you don’t plan to transfer, Trixy says there are valuable internship and job opportunities at CCC. “Professor Mickels has a lot of connections,” and other students often refer each other when they find jobs. “Networking is one of the biggest advantages to the program.”

But don’t just take her word for it.

“Try it out,” she says. “Reading about the program does not even compare to the experience that you get in class.”