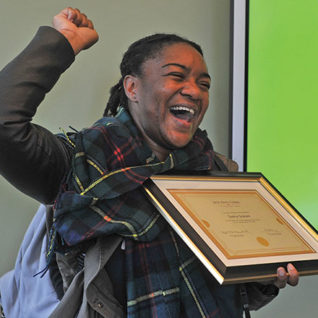 CCC’s own Sasha Graham is one of 55 students nationwide to win the prestigious Jack Kent Cooke Foundation Undergraduate Transfer Scholarship.

Graham is a single mother of a nine-year-old son who also sits on CCC’s Extended Opportunity Programs and Services (EOPS) Advisory Board. She’s already been accepted to the Universities of California, Davis and Santa Cruz, but is considering other schools, as well.

Through the scholarship, Graham qualifies to receive $40,000 for three years of completing her undergraduate studies, then another $50,000 per year for up to four years if she decides to get a graduate degree. She’s earned a number of other scholarships, as well, including the $10,000 Kennedy-King Memorial.

According to The Advocate, Graham was moved to tears when applause erupted during a surprise gathering in President Mojdeh Mehdizadeh’s office.

“I know that I earned these scholarships with blood, sweat and tears,” she added. “I do not believe in doing your best, because some days your best is not good enough.”

Photo by: Denis Perez / The Advocate.