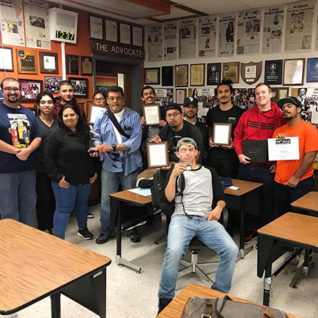 In celebration of its 100th anniversary, the ACP calculated the 100 most-winning competitors for its top honors, the Pacemaker awards. The awards recognize the finest in American college newspapers, magazines, broadcasts, websites and yearbooks. Media outlets were awarded five points for each finalist placement and ten points for each win. Over the organization’s 100-year history, there have been 1,450 finalists in competition.

“The Pacemaker really represents the best of the best,” ACP associate director Gary Lundgren said in a release. “And it is appropriate that we recognize the rich tradition this award has in collegiate  journalism as part of our centennial celebration.”

At its National College Media Convention this October, they announced the top ten most-awarded student media outlets. Coming in at number seven, Contra Costa College was the only two-year media outlet among nine four-year universities. No other two-year outlet made the top ten, and specific rankings below that were not revealed.

“Few people on campus now know how hard student-journalists worked for more than 60 years to document events on our campus,” said retired journalism Paul DeBolt, who advised the paper for 40 years before his recent retirement.

“It’s important for students to have a voice on their campus and report the truth. This incredible recognition speaks to the strength of our college -community connection, the dedication to excellence that exists throughout our student body, and the talent, teamwork, resolve and love for CCC that has existed in the hearts of The Advocats since the early ’60s.”

Check out our Journalism department if you’re interested in becoming part of The Advocate’s award-winning staff.