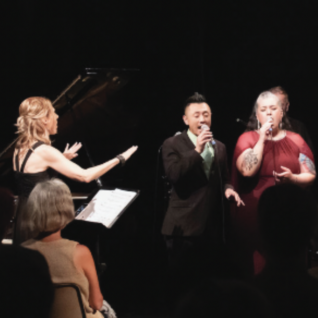 Here’s what they had to say:

Stephanie Austin Letson holds a number of titles at Contra Costa College in San Pablo, California. The professor of music is also the director of choral activities, performance program director and coordinator of vocal and piano education at the college. But wearing all these hats didn’t stop her from essentially creating a DownBeat Student Music Award-winning program from the ground up…

“It was a long process. First, we had to get the minimum student numbers to even have classes, then bring in instructors and create the curriculum to include the right classes.“I decided to begin by focusing on beginning classes in voice, choir and piano to build skills. And I decided to do a vocal version of a boot camp that I had read about [that] a middle school jazz band teacher had done. In 2008, for the first six weeks of class, we didn’t do a single piece. We did ear training, sight reading, scatting — anything that would help the students grow. And they liked it, and it began to work.

”Letson’s first vocal group was Jazzanova, which varied from six to eight members. By 2011, it became clear to her that the program had reached to point where a more advanced group could be created.“

“We needed a place for the Jazzanova singers to go,” she explained, “and give them the next level of challenge. So we started JAZZ-ology.”

Once Jazzanova won the program’s firstDownBeat Student Music Award in 2013, more followed. Contra Costa jazz vocal ensembles have won nine over the past nine years — as well as being named a top six national finalist at the Monterey Jazz Festival Next Generation competition.

“For me, that’s what’s lovely about community colleges,” Letson concluded. “There’s such diversity in age and socioeconomic background of the students. And for some students, a community college degree might be it, while for others, it’s a stepping stone. No matter what, these vocal students get a great experience — and hopefully a love of jazz. And that’s a wonderful thing.”