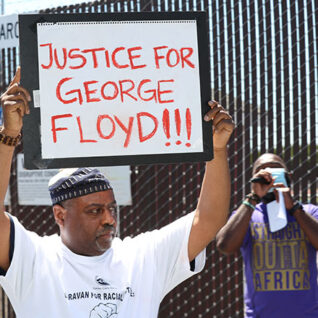 On Tuesday, June 9, organizers at Contra Costa College held a rally and mobile demonstration in support of racial justice for George Floyd and the Black Lives Matter movement.

At 9:00 a.m., students, employees and community members departed the school’s campus in San Pablo. The hundreds of participating vehicles then gathered together at Richmond’s John F. Kennedy High School, where a demonstration and rally will be held in support of racial justice.

Participants brought signs and decorate their cars for what KPIX described as a “loud, musical” caravan. Other newsmedia on the scene included KTVU, The Richmond Standard and The Richmond Pulse.

“This is who we are at Contra Costa College,” said Interim President Damon A. Bell. “We speak out when there is an injustice in society. “

KPIX also noted that, “There were so many vehicles, the caravan stretched for blocks.”

Along the route, community members cheered and raised fists in solidarity.

Prior to the event, the Caravan for Racial Justice: Honoring the Life of George Floyd Planning Committee has issued the following statement:

“As the Contra Costa College community, it is our job to teach tolerance, and we must speak out when there is an injustice in society.

“This is a momentous time in our history both as a nation and college. We are being called to speak up for and take action in support of black lives and to denounce anti-blackness and systemic racism. As a campus community comprised of students, classified professionals, faculty, and administrators, it is critical that we take action toward racial justice.

“The time is now to heed the calling of our great leaders, including Dr. Martin Luther King Jr., who said that, ‘Our lives begin to end the day we become silent about things that matter,’ and Dolores Huerta, who challenges us to become a part of history.

“No one can feel the power of this historical moment from their couch, so our college community is organizing the CCC Caravan for Racial Justice to make a public statement in embracing equity and justice, and denouncing racism in all its forms.

“Racism and bigotry have absolutely no place in our college, our state, our country, or in our world. As former Senator Paul Wellstone said, ‘We all do better, when we all do better.’”