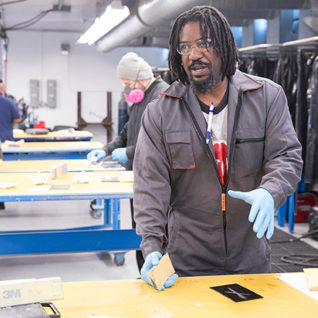 Akim Henderson Is Here for His Fellow Students

In fact, Akim’s journey stands as a testament to the power of perseverance.

“I grew up with an absent father,” he recalls. “My mom was killed when I was 10. And, I have lived through gun violence and substance abuse.”

“I went to Cal Poly San Luis Obispo out of high school at John F. Kennedy in Richmond. I had a chance to pursue football, which I wanted to do.”

But, a girlfriend’s unexpected pregnancy took him out of school, and brought him back to Richmond.

“I didn’t want to be irresponsible, or continue the chain I had watched of neglectful parenting. I wanted to be a family man.”

But, back at home, Akim felt his life lacked direction.

“I never really respected myself,” he remembers. “I considered myself expendable, and that’s how I lived my life.”

Akim needed some encouragement. Luckily, it was just around the corner.

“I married a wonderful woman, who encouraged me to go back to school. She said it was time to start investing in myself.”

So, Akim got hard at work to become a role model for his daughter. He decided to finish what he started many years ago: his education. Six years ago, Akim enrolled at CCC for the first time.

“My goal in life,” he says, “is to live with a purpose, and to provide support and a safe space for others to talk about their problems.”

A death in the family forced Akim to leave school, again. But, that wasn’t going to keep him down.

“I came back again in fall of 2018,” he says. “It took me a while to get back into the mentality of school. But, this is the best thing, and I am moving forward.”

Akim is now working toward completing an A.A. in 2020. His goal is to become a journeyman technician.

Back at CCC, Akim has become determined to help other students who are facing challenges similar to the ones that he has lived through, and help provide a safe space for people in the community to support one another.

He himself has found a great support system at CCC.

“Sometimes just knowing that someone has heard you can make all the difference,” he says.

And, when a financial emergency nearly forced him to leave school yet again, the Contra Costa College Foundation was able to help him stay in school through its emergency fund. “That gave me the support that I needed to make it through the semester.”

“[Automotive Services Professor] Laura Salas is my mentor. I have so much respect for her, especially as a woman in the field. I’ve been training to take over the position of tool attendant.”

“I highly recommend that everyone take a class from the Automotive Department,” he says. “Through this program, you work hard and learn discipline.”

He’s even working on an industry innovation, for which he hopes to receive a patent.

His biggest accomplishment, though?

“My greatest achievement is being here, at CCC.”