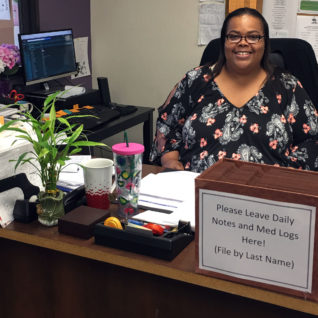 Lavonn was a stay-at-home mom. Her twins were born prematurely and their medical problems required special care.

“I was on welfare,” she remembers, “living in the projects. I knew I wanted more for my kids. They couldn’t even go outside to play. But I knew nobody was going to hire me, because my skills weren’t strong.”

Before she’d had her twins, Lavonn enjoyed doing clerical work for her uncle’s restaurant. She’d also thought about working in medical administration. So when she found out CCC had a Business Office Technology program, she knew that was where she wanted to be.

At first, Lavonn was scared. She was uncomfortable around large groups and older than she expected the other students to be. But she soon felt at home on campus, where she met a lot of adult learners just like herself.

“Once I got into it,” she says, “it was great. Everybody was friendly. The professors were easy to talk to, and anytime I had a problem with something or was struggling–which wasn’t very often–I was able to get the help that I needed.”

She even met her current employers at a CCC job fair.

Lavonn was months away from graduating and the company, Pathway to Choices, wasn’t even looking for someone with her skills. They were on campus to find caregivers the adults with physical and developmental disabilities that they work with.

But after getting to know Lavonn a little, they decided to create an Administrative Assistant position for her. They worked around her school schedule and, after she graduated, expanded her job. “They ended up needing me more than they thought,” she says.

“I got my first raise. Then, about three months later, I got another.”

Two years later, Lavonn still wakes up in the morning excited to go to work. “I love the people that I work for. They have this ‘family first’ motto, and they treat me just like family.”

They also value the skill and experience Lavonn brings to the company. They listen to her thoughts and opinions, and have implemented a number of changes that she’s suggested.

“My professor, Pamela Rudy, taught me how to voice my opinions without overstepping. She is amazing. Amazing.”

“I got stuck on a problem, and I was ready to walk out. She knew it. She could see it. She talked to me, told me to take a deep breath and think about it. And I got it.”

“She’s not just a professor. She was my rock. I was having problems at home and she would talk to me. She would listen.”

Now, Lavonn’s life will never be the same. Her time at CCC has helped her better the lives of herself, her children and many local people with disabilities.

“I’m no longer on welfare,” Lavonn says with pride. “I got my kids out of the projects, I pay my own bills, and it just feels amazing to take care of myself without being in the system anymore.”

Her message to people who might be considering CCC or the Business Office Technology program?

“Do it! It’s a great program and it teaches a lot of different skills. I wouldn’t be where I am today without the Business Office Technology program and CCC.”