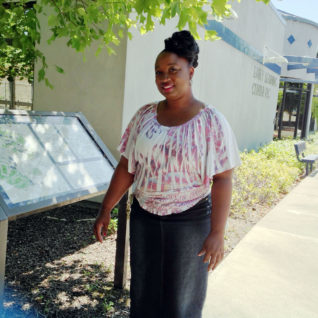 Jannika Wagner has a message for you: “It’s okay to take baby steps.”

“Think big,” she says, “and figure out the small steps to get there.”

Jannika graduated from Contra Costa College recently, but she first came here back in the late 90s, when she took a dance course to satisfy a high school PE requirement.

When she graduated from high school, Janikka didn’t go right to college. Instead, she went to work as an aide in a special education classroom. She took a few courses at another community college in order to meet work requirements, but didn’t complete a certificate or degree program.

Then, like a lot of people, Jannika was hit hard by the 2008 financial crisis. She also began to notice that education was becoming more important in the workplace, as jobs that previously only required experience suddenly demanded bachelor’s degrees.

“I just knew I needed to do better,” she remembers. “I was a single mom, and I needed more than what I had. I went from one kid, to two kids, to three kids, and just thought, Oh no, this is not gonna work.”

So, in 2010, she came back to CCC to take a few core classes and become more competitive in her field.

“It was a little odd at first,” she remembers. “I wasn’t too sure what I was doing, how to really get around, what my avenue was going to be. But I got a lot of help. Everyone that I encountered was very helpful, like the financial aid office and the counselors.“

“And,” she adds, “it’s not overwhelming. Some people, especially older adults that come back to school, think college is going to be awkward or uncomfortable, because they haven’t been to school in forever and a day. But you get there and everyone’s feeling comfortable. It’s a powerful, positive, empowering place.”

During one of Dr. Intisar Shareef’s Early Childhood Education classes, Jannika decided to stick around and get a degree.

“It opened my eyes,” she says, “to the underlying trauma that’s in our community, to the things that you just kinda block off, thinking they’re healed moments, that you’re not going to live them anymore… but you still are.”

“It intrigued me,” she remembers. “I knew at that point I no longer wanted to be just an assistant in a classroom.”

Jannika had trouble reading, so she had to take some beginner courses. She also took a lot of time off between semesters. But, she says the passion of instructors like Dr. Shareef and Sandra Moore inspired her to keep going.

The Friday before one spring break, Jannika went into labor with her youngest child. The Monday after break, she was back in class. A few weeks later, she graduated with honors, associate degrees in Liberal Arts and Early Childhood Education, and four certificates of achievement.

“Almost everything Early Childhood Education offers,” she says, “I have it.”

Now, Jannika is a Behavior Therapist with Kids Overcoming. She develops and implements treatment plans for autistic children, working directly with them in their homes and schools.

“I just got this job,” she says. “I’m really excited about it. It’s more of a cognitive approach, to get them to meet certain goals that relate to their behavior beyond academics.”

She plans to continue her education at a four-year university and eventually open her own childcare center.

Jannika’s advice for anyone thinking about continuing their education is to stick with it, even if you move at a slower pace.

“And take the library studies course in the beginning,” she adds. “It gets you college-ready.”