Quick Links
Congratulations, Class of 2022! We can't wait to see you at graduation! It's happening on-campus May 20.
More Info
Translate 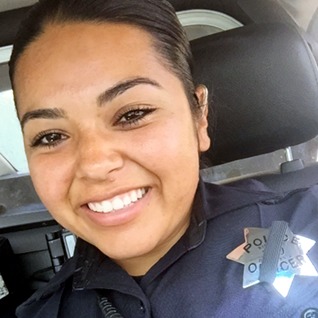 Growing up in Richmond, Carmen Santana struggled with poverty, domestic violence and hopelessness. Her parents never graduated high school, and didn’t know how to help her succeed. She had to work a lot just to buy basics like clothing, and missed so much high school that she got kicked out of more than one. She ended up bouncing back and forth between continuation schools.

“I didn’t have a lot of positive role models,” she remembers. “I always doubted myself.”

Still, she knew she wanted more.

“There’s a stereotype that Latinas don’t succeed, that they’re just housewives. I didn’t want that for me. I didn’t like the lifestyle that my mom lived.”

Carmen was attending North Campus Continuation School in San Pablo when a friend from Richmond High told her about the Richmond Police Department Explorer Program. She joined up.

As an Explorer, she gained self-confidence and discipline, and learned how to be a leader.

“He was more of a father,” Carmen recalls, “than anyone I had around. The support and love and patience he had for me were great. I made some mistakes, but he guided me.”

Ramos encouraged her to go to college.

“If it wasn’t for that,” she says, “I honestly don’t know what I would be doing, today.”

She chose CCC. It wasn’t just because Ramos taught here, or because it was affordable and easy to get to. “Why go somewhere else,” she thought, “when you can put your time and money into your own community?”

It wasn’t always easy. Carmen had a lot of catching up to do from all the high school she’d missed. On top of that, she was working full time as a security guard at Walmart and part time as a cadet at the Richmond Police Department.

But at CCC, Carmen had tutors and teachers who cared. Many of them grew up in the area, too, so they really understood where their students were coming from. Ramos even helped her find scholarships and other ways of paying for school.

“The encouragement they provided,” she says, “really helped me excel.”

Carmen became the first member of her family to graduate college in 2013, and immediately decided to join the Richmond PD.

“I wanted,” she remembers, “to make a change within myself, my friends, my family and my community. I have a passion for helping people.”

Four years later, Officer Carmen Santana is doing all of that.

“Giving back to my community is the best,” she says. “I truly love what I do. It’s not just a paycheck. It’s a blessing.”

“This job is not easy,” she says. “There’s a lot of kids here that need a lot of motivation, a lot of support. Honestly, a lot of love, too. A lot of love they don’t get at home.”

“I see myself in them, sometimes.”

And, she says, “You see the success stories, some of these kids graduating and doing better.”

She even established and pays out of her own pocket for the Strive for Success scholarship, which helps students who want to work in public safety pay for school.

But, she thinks it’s important to go to college even if you don’t know what you want to do, yet.

“Get your foot in the door,” she says. “If you don’t know what field you want to go into, at least start taking the general education classes. It’s a great opportunity to get your feet wet.”