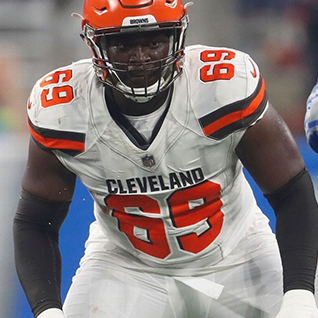 Cleveland Browns fans were disappointed this year to learn that legendary offensive tackle Joe Brown was retiring, after over 10,000 consecutive snaps and ten Pro-Bowl selections. Who could fill shoes like those?

The Browns turned to former Comet Desmond Harrison, an undrafted rookie with a reputation as an extraordinary athlete, even by NFL standards.  They immediately started him as left tackle.

It was a bold move. Harrison was never a starter in four-year college football, and entered training camp with an injury.

Harrison started his career at CCC, where he played two seasons before transferring to Texas. But, his troubled personal life led to his ouster, and two years of personal reflection, before he was back on the field, playing for West Georgia.

“He’s the best left tackle for us to play right now,” Coach Hue Jackson recently told the Akron Beacon Journal. “We feel like we’re heading in the right direction by far. I agonized over this decision because it’s a huge decision. At the same time, I have confidence in our coaches and in the player. He has worked hard. He wants this opportunity. He has demonstrated that.”

Harrison isn’t the only former Comet making waves in the NFL. Last season, Takkarist McKinley was widely regarded as the ‘star of the NFL draft.’

Check out our athletics pages to find out more about Comets football.