Summer classes and student services are fully remote! Here’s what you need to know. 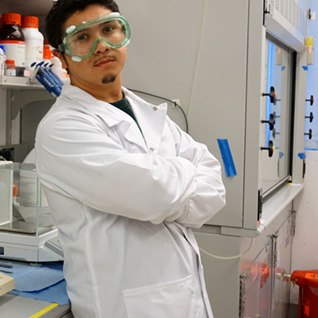 Accomplished Scholar Robin Lopez Has a Goal: Teach at CCC

When Robin Lopez was a child, his mother would bring him along as she drove his father to work. The route took them over the Richmond-San Rafael Bridge. One day he asked her, “How is this road above water?”

After looking the occupation up in an encyclopedia, Robin knew that was what he wanted to become.

He did it. And along the way, he surpassed even his own goals. He won major scholarships and one of the most prestigious awards in science. He also dropped out of school more than once.

Life had been hard growing up, and Robin wasn’t always able to focus on school.

“When I was in high school,” he explains, “I wasn’t prepared for anything college-related. My priorities as a youth were survival, staying alive. Not academics or a career.”

Robin went straight from high school to San Francisco State. After only a couple weeks, he dropped out.

“After that, I took a significant amount of time off from education. I just didn’t see it being suitable for me. I would take classes here and there, but I really wasn’t finding my way, yet.

His best friend’s suicide changed all that. Robin decided it was time to straighten up. He decided to enroll at Contra Costa College, because it was right behind his house.

At first, he was unsure of himself.

“Most of my friends didn’t pursue college,” he explains. “Many of them didn’t even graduate [high school]. As a person of color, I was nervous about pursuing academics at any level. But here at Contra Costa, they helped personalize and normalize it.”

Through CCC, he met new friends who shared his goals and interests.

One of them told him that the Center for Science Excellence (CSE) on campus offered tutoring, mentorship and could maybe even help him find an internship. He jumped at the opportunity to get involved. “They had me at ‘tutoring,’” he laughs.

And then there were the regular seminars, in which working professionals helped him get a better idea of how he wanted to apply his degree. He especially loved the Q&As after each presentation.

A speaker from the Department of Energy especially intrigued him. “I thought, I have to intern there. They’re doing incredible work and I want to be part of it. So I gave it a shot. I was given an internship offer and that led to a second internship offer, which led to employment with Lawrence Berkeley National Lab before I even transferred to San Francisco State.”

Through all of this, Robin also discovered Metas, a CCC program that prepares local school children to meet the demands of higher education. He saw tutoring there as an opportunity to help save other kids from his late friend’s fate.

“I remember ten years ago,” he says, “when I was finishing high school and didn’t know what I was going to do with my life. Feeling like no one wanted me, feeling like there was no place for me in the professional realm.”

Robin wanted better for other kids, as his continued involvement in Metas attests. He now instructs fourth and fifth graders there, as a member of the faculty.

“I’ve been teaching them,” he says, “about how technology is all around us, how that changes their social interactions. This semester, I’m focusing on technology and innovation, and exposing them to the fact that a lot of the technology around us was created by people of color.”

For an idea of how important this is to Robin, consider the other demands on his time.

He graduated from CCC with degrees in Mathematics, Physics, and Sociology, then transferred back to San Francisco State, where he earned a BS in Civil Engineering. Today, he’s a graduate student at San Jose State University for Water Resources Engineering, as well as a Research Associate at the Lawrence Berkeley National Lab, working on several projects for the U.S. Department of Energy.

Along the way, he has been awarded Kennedy-King Memorial Scholarship and White House Presidential Service Award. Most impressively, last March he was awarded the highly competitive National Science Foundation Graduate Research Fellowship (NSF GRFP). This grants him $138,000 to pursue his PhD. It is also very prestigious, and has made him incredibly attractive to graduate schools, who are currently competing for his interest.

His ultimate goal is to come back to CCC to teach as a professor.

Robin says that his story, remarkable as it is, is not uncommon. “I’m not the only example of success in CCC’s STEM programs,” he insists. ”Or the best.”

Still, looking back at his life before and after CCC, Robin is overwhelmed.

“I can’t even describe the feeling,” he says. “I was unsure about academics and college, and have dropped out several times. Now, I have one of the most prestigious titles in science under my belt. I’ve got professors and universities calling and texting me, asking when they can fly me out to wine and dine me.”

“If it wasn’t for Contra Costa College and the resources there,” he insists, “I would not be in the position I’m in today.”